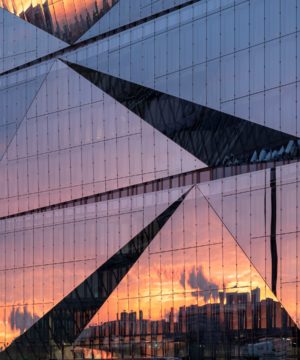 Cube Berlin is an eye-catching, 11-storey office building located at Washington Platz in the Europacity urban district of Berlin. This 19,000m2 structure, developed by CA Immo, is an example of how innovative architectural design can be successfully combined with the complex technical (structural and energy performance) requirements of an ‘intelligent’ commercial building.

Designed by 3XN Architects of Copenhagen, Cube Berlin stands out due to its fully glazed, double-skin ventilated facade that integrates the building into the surrounding environment. The facade not only meets the aesthetics required by the architect, but also meets the high structural and energy performance requirements.

Due to the combination of glass used in the fully glazed facade, the aesthetics are visually appealing, reflecting the building’s surroundings on all sides and dynamically changing its appearance depending on the viewing angle, the weather and time of day. The dynamic facade uses a stepped thermal facade beneath an outer glass skin, which wraps the building in a triangular pattern. Access points are introduced through a set of articulated openings in the outer skin on all four sides and on multiple floors.

Torben Østergaard, partner at 3XN and architect on the project, said: “Our initial idea was to sculpt the building so that it would enter a dialogue with the urban space, the surrounding buildings and life at Washington Platz. In order to make the building work as a sculpture on the square we were looking for reflective glass that emphasises the surface while also visually reflecting the surroundings. “As the floor plates are rather deep, we were aiming at a fully glazed facade, not only to produce the best possible daylight conditions but also to allow for the particular feel of floor-to-ceiling windows that offer great outside views.”

The facade also offers effective protection against solar heat gain, while allowing the occupants to benefit from natural ventilation.

Matthias Schmidt, head of development at Investor CA Immo, said: “The design of the facade is actually very energy efficient and, together with a clever technical concept that, among other things, includes regaining energy from heat, adds up in total to an effective energy solution that will negate the common idea that glass buildings are severe energy spenders.”

Another challenge was the structural make-up of the glass. This meant adding another structural interlayer, which had to be compatible with the solar absorbing PVB interlayer. This solution was developed from scratch and national approval had to be sought during the design and construction phase. By adding this extra structural interlayer, edge stability was increased, and the risk of delamination lowered, while reducing the yellowness index.

Olivier Beier Costa, Guardian Glass sales manager, said: “The biggest challenge was to combine two things. First of all, the design and aesthetic concept of the architect, and secondly, the technical requirements of the building, so we had to identify the right products that could be used for such an application. That involved the performance of various tests and calculations, as well as the production of many samples.”

Why not subscribe to Glass Times?
Previous Covid-19 sales Next Sustained uplift in demand