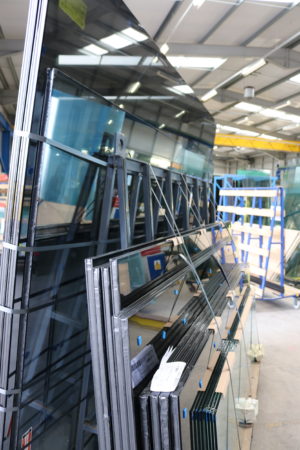 Industry needs to brace itself for new price increases as wholesale energy costs rocket. Glass Times talks to Mark Mitchell, chairman of Cornwall Group, to find out why.

Twelve energy companies have collapsed so far this year, each having struggled to cope with an increase in wholesale gas prices which currently sit 250% higher than they were in January, and having seen jumps of as much as 400% this year.

The ramifications of the increases for industry are far reaching. British Steel warned that power prices were now “spiralling out of control” with energy costs accounting for up to 20% of the costs of converting basic raw materials into steel, making manufacture unprofitable.

And, as an energy hungry industry, glass supply is also impacted.

“Gas prices have had a massive impact on the operational costs of float glass manufacturers,” Mark Mitchell, chairman of Cornwall Group, said.

“Float glass lines use an immense amount of gas and energy in production. The increase in wholesale gas prices has added more than a £1 million a month to manufacturing costs, and that has ramifications for the whole supply chain.”

With its own glass merchanting business, in addition to its three IGU manufacture and toughening facilities, the challenges now faced by the Cornwall Group highlight the scale of the task ahead for the glass industry.

“We’ve seen increases in percentage terms or specific energy surcharges applied to us by all of our float glass suppliers,” Mark said.

“As a starting point, if you look at Mackenzie Glass, our merchanting business, Pilkington has placed a 9p/kg energy surcharge on the products we supply.

“That doesn’t sound much but the accumulative effect is massive.

“And if you break that down further, you can see how ultimately, it’s going to impact on the cost of retail, so it’s going to affect each element of the supply chain.”

This includes IGU manufacture. Cornwall Group has four high voltage sites within its business, running toughening plants at three of them: St Austell, Plymouth and Highbridge.

“The timing hasn’t been helpful to us because we’re coming out of fixed term agreements with our electricity suppliers,” Mark said.

“As a starting point we were told by one supplier that they wouldn’t even provide us with a quote because of volatility in the price of wholesale electricity. Now we’re looking at around a threefold increase in what we were paying on our previous tariff; that’s going to increase our operating costs by £75,000 per month.”

This, he warns, is going to put further pressure on dedicated toughening businesses. Their cash flow, he says, has already been put under pressure by shortages of 4mm float and soft coat. With increased energy costs, he suggests that capacity may now go out of the market.

“It’s difficult for us. We toughen but it’s not all we do; we’re an IGU manufacturer and processor. If all you’re doing is single toughened, everything is about volume. You’re geared up to process thousands and thousands of metres per shift, but your margins are tight.

“If you’re already working a three or four day week because the product isn’t there to manufacture, your cashflow is already likely to be severely stretched.

“Add in substantial increases in cost of raw materials and energy costs and your overheads are going to increase very rapidly, so if you don’t pass those costs on almost immediately, you’re going to come under pressure.”

Having switched to a new divisional structure in 2019, with independent boards for its merchanting, manufacturing and glazing divisions, Mark argues the Cornwall Glass Group has been agile enough to adapt to change, while still facing significant challenges.

“As soon as those price increases came into us we wrote to all of our customers explaining why, and that we were having to restructure our pricing models with immediate effect because we had to.

“It wouldn’t have been sustainable for us to try and absorb them and, in the same way, our customers need to be building those increases into their own models.”

Why not subscribe to Glass Times?
Previous Short term growth but storm clouds on the horizon? Next Spreading the cost