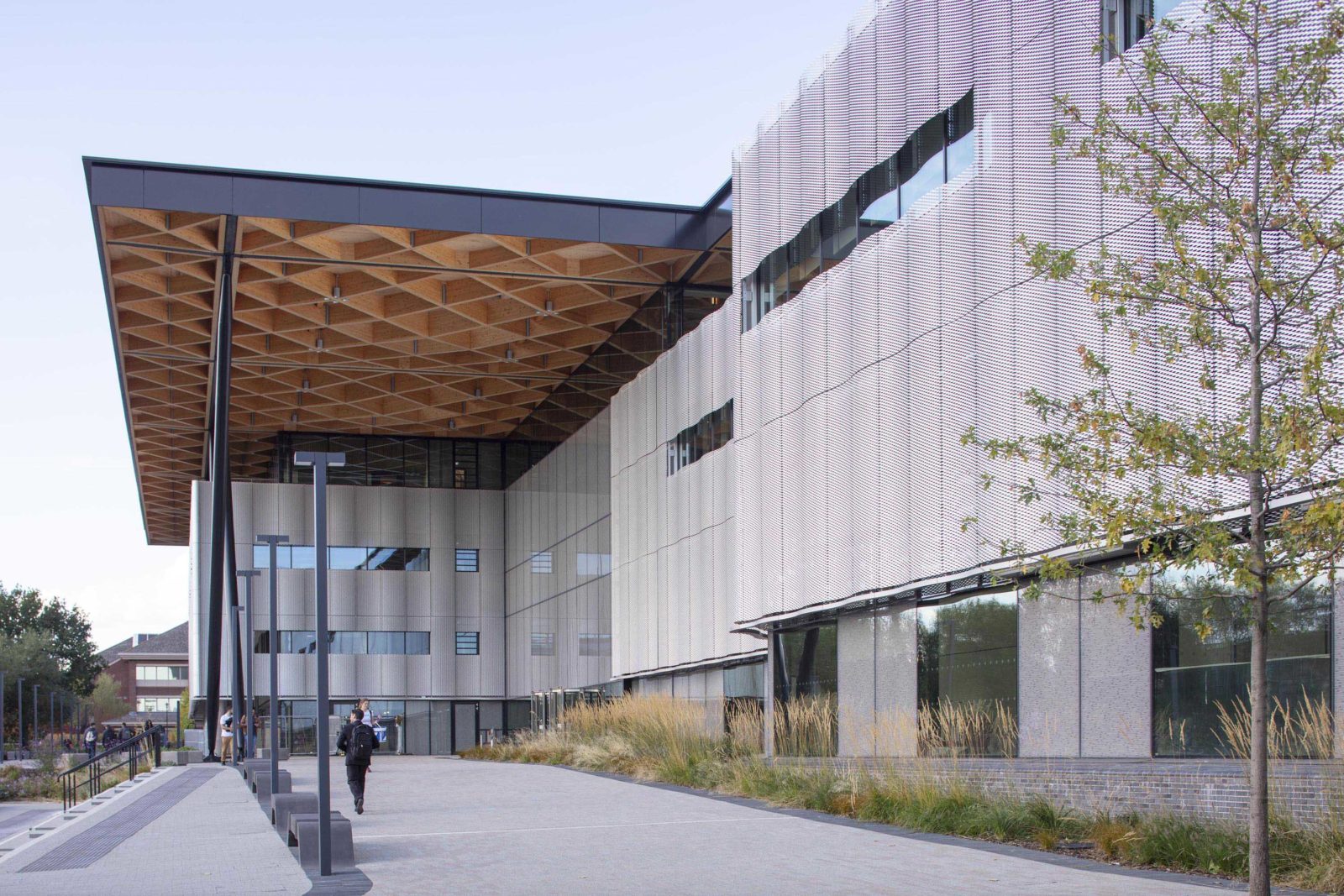 The centre – a partnership between the University of Warwick, Jaguar Land Rover and Tata Motors UK – is one of the largest of its kind in Europe, and features Kawneer’s AA110 mullion-drained curtain wall.

The curtain wall system with 65mm sightlines, occasional fritting and in places a translucent inner layer, has been used at triple height on the entrance facade, as ribbon glazing on the ground and third floors, and as roof lights underneath the over-sailing roof.

Delivered between January 2015 and August 2018, using BIM by main contractor Balfour Beatty, the project was the first live construction site to trial BIM-based meeting space, and such was the success of BIMspace, a next-generation facility camouflaged in a site cabin, it won BIM Initiative of the Year at the Building Awards.

The L-shaped building is four storeys high and is 33,000m2, with a full-height atrium and a glulam and steel composite diaphragm roof. The Kawneer glazing, which allows natural light to penetrate the deep-plan building and provides views in as well as out, was divided into several equally key components.

At the entrance facade, the quadruple-height Kawneer curtain walling demarcates the public entrance area to the building, allowing for views in and out from the main entrance space/exhibition, while triple-height glazing mirrors the glazed wall to the engineering hall directly inside the building. Glazing in this area is bolted back to full-height rectangular steel sections and interfaces with revolving doors at ground level.

The ground-floor ribbon glazing, linking into the entrance facade glazing, wraps around the main public front to the building, providing a fully-glazed facade to the cafe as well as the student projects space.

Generally single storey in height, with elements of double storey glazing at key points along its length, some panes of glass are fritted at 60% grey to provide shading and, in more commercially sensitive areas and service areas, an interlayer was added to make the panels translucent. Incorporated into the Kawneer system are a series of glass louvres controlled by an actuator providing smoke ventilation in case of a fire in the exhibition area.

On the majority of the third floor, a ribbon of capped curtain walling provides a visual break between the timber cladding panels and the glulam roof which appears to float over the building, while allowing the third-floor office spaces to take advantage of panoramic views. Here, the Kawneer curtain walling also deals with the deflection of the dramatic glulam roof which can deflect by up to 50mm.

The Kawneer capped curtain wall also forms punched windows in the brickwork and timber cladding panels, allowing natural light into, and views out of, offices, key working spaces and stairwells. Here, the system allows for deflection of the timber cladding panels, with glass louvres incorporated into the Kawneer system in the stairwells to provide smoke ventilation in case of fire.

Glazing mullions were positioned to reflect the rhythm of the anodised aluminium mesh cladding around the first and second storeys, and the curtain walling was powder coated to match the colour of the structural steel elements of the building.

Environmental sustainability influenced the choice of materials and construction methods, including the in-situ concrete frame and glulam roof structure, which was renewably sourced with low embodied energy. The roof also houses 1,900m2 of photovoltaic panels to reduce the energy load. 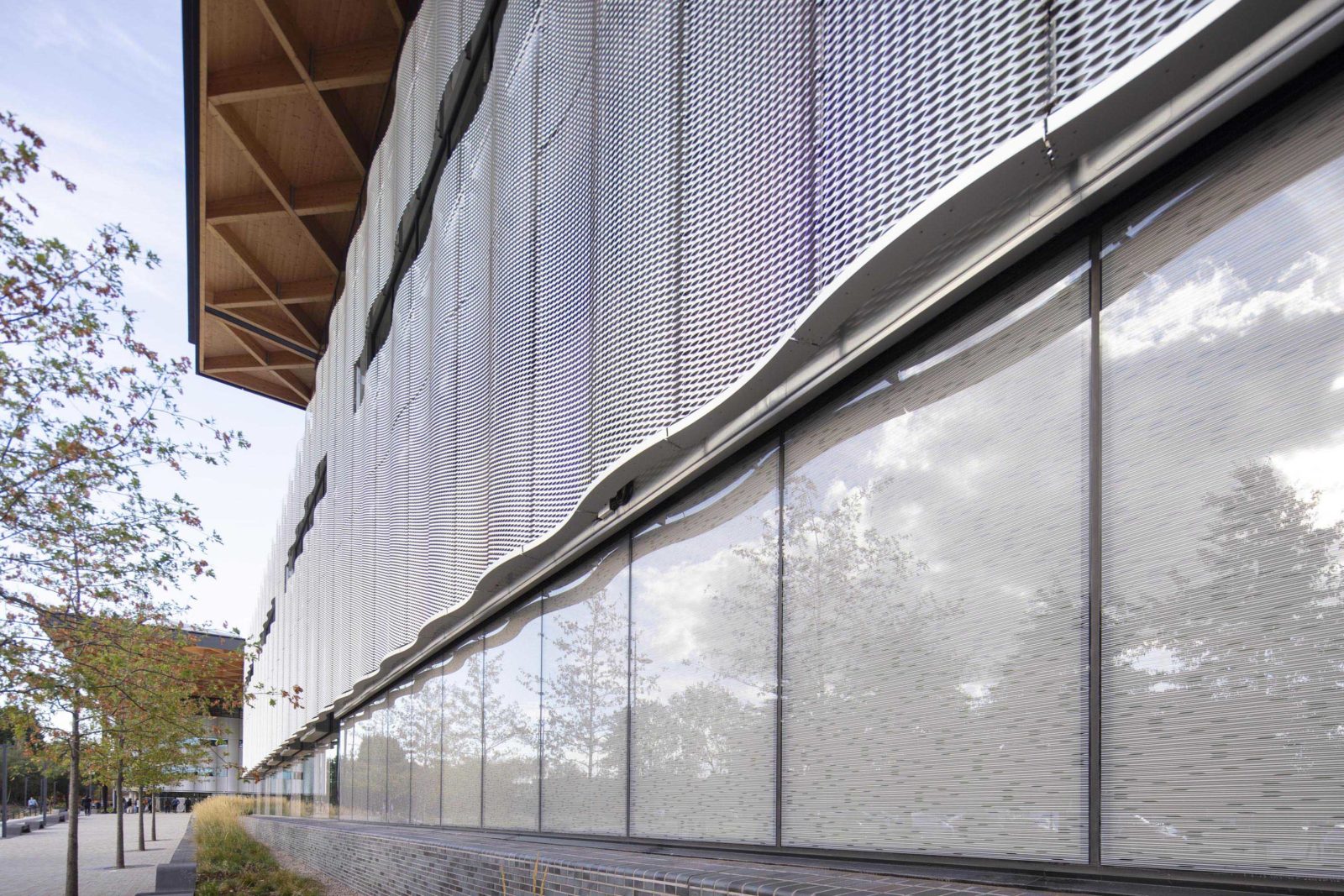 Why not subscribe to Glass Times?
Previous New flush opportunities Next Defying the weather