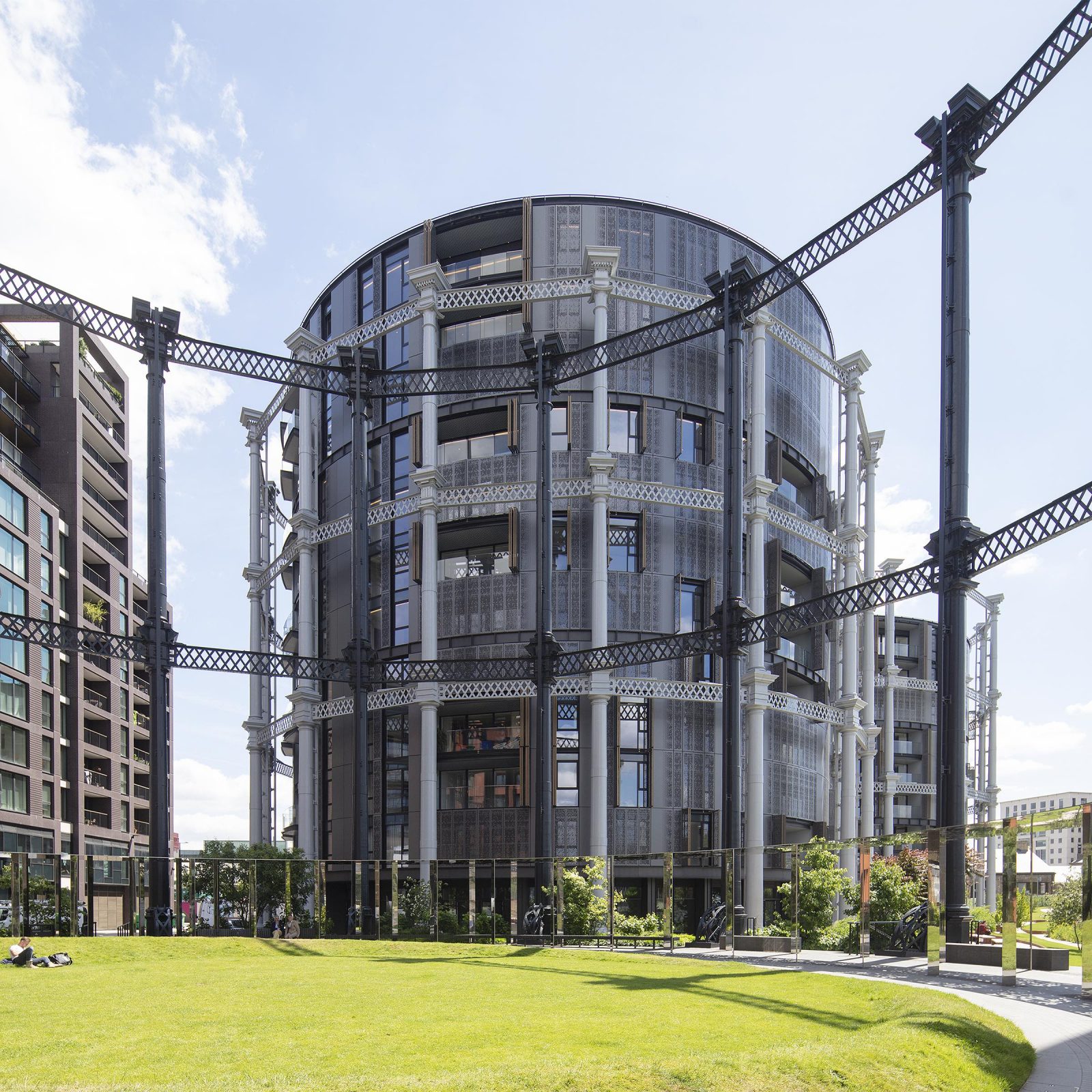 The design team responsible for the visually striking redevelopment of three redundant gasholders in the Kings Cross area of London used a unitised version of Wicona’sWictec system for the facades to the apartments created.

Dating from the 1880s, the ‘Triplets’ are a trio of interlocking skeletal drums that once held supplies of town gas, which have now been relocated to a site near the Regents Canal; maintaining a link to the district’s industrial past.

Within the Grade 2 steel framework that was restored at Shepley Engineering’s Yorkshire workshops, the triple glazed and thermally broken aluminium Wicline window solution provides the occupants with excellent thermal performance and weather resistance, as well as high acoustic control as they look out on the views of the capital. The package was delivered by Italian project manager, Frener and Reifer, working with Wicona at Ulm in Germany. Arup filled the dual roles of facade and structural engineers.

The specially adapted version of the WiconaWicline 75 system was tested by ift Rosenheim, delivering the highest air permeability classification, Class A4. A dynamic watertightness test resulted in a pass at a pressure of 600 Pa. Safe wind loadings of 1.95 kN/m2 positive pressure, and 2.55 kN/m2 negative pressure have been derived from the tests.

Facade engineer Rob Buck said: “We provided a performance specification to FrenerReifer who then identified Wicona’sWictec system as the most applicable to the project’s demands. The Wicona facade system met the stringent thermal requirements which were compounded by the penetrations through the facade to support the balconies and solar-shading systems. The primary facade was installed from the floor plate which avoided the potential of clashing with the Gasholder steel framework.”

The Ribajudges said: “The heavy industrial structures in their full restoration remain as a dominant feature on the new skyline of Kings Cross. Sitting comfortably within these structures are the three residential drums, clad in a delicate and intricate aesthetic of steel and glass panels, with a veil of external shutters pierced in a pattern of circles to allow dappled light into the rooms.

“These create a homogenous yet dynamic skin, paying homage to the original drums which once sat in these gasholder guide frames. However, they also fulfil a functional and environmental requirement for modern living. The judges were impressed by the facade design; addressing the challenges of privacy, solar shading and window dressing, while celebrating the industrial heritage of the gasholders.”

The Wicline system offers both aesthetic flexibility and a high level of functionality, allowing the specifier to optimise energy performance, acoustic insulation and security. Like the other Wicona systems it is compatible with the Wictec facade options which extend from the classic stick assemblies to unitised and even structural glazed elevations.

Wicona is part of the Hydro Group, and through its globally renowned Hydro Technology Hubs the group is claiming to shape a sustainable future, with products that satisfy and surpass customer expectations, in line with demands of corporate social responsibility and increasing environmental regulations. 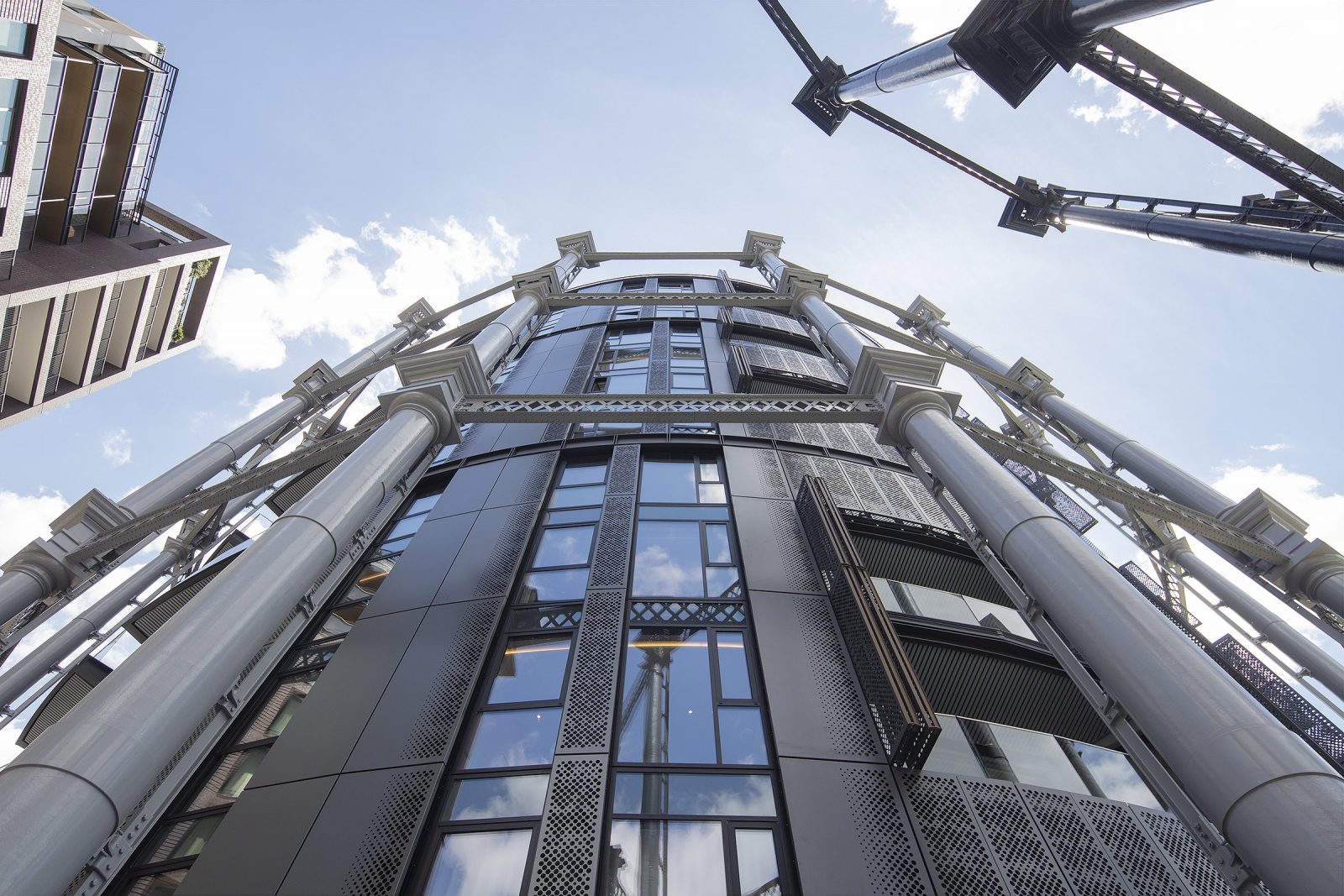 Why not subscribe to Glass Times?
Previous Opportunities and challenges Next Golf day supports victims in need