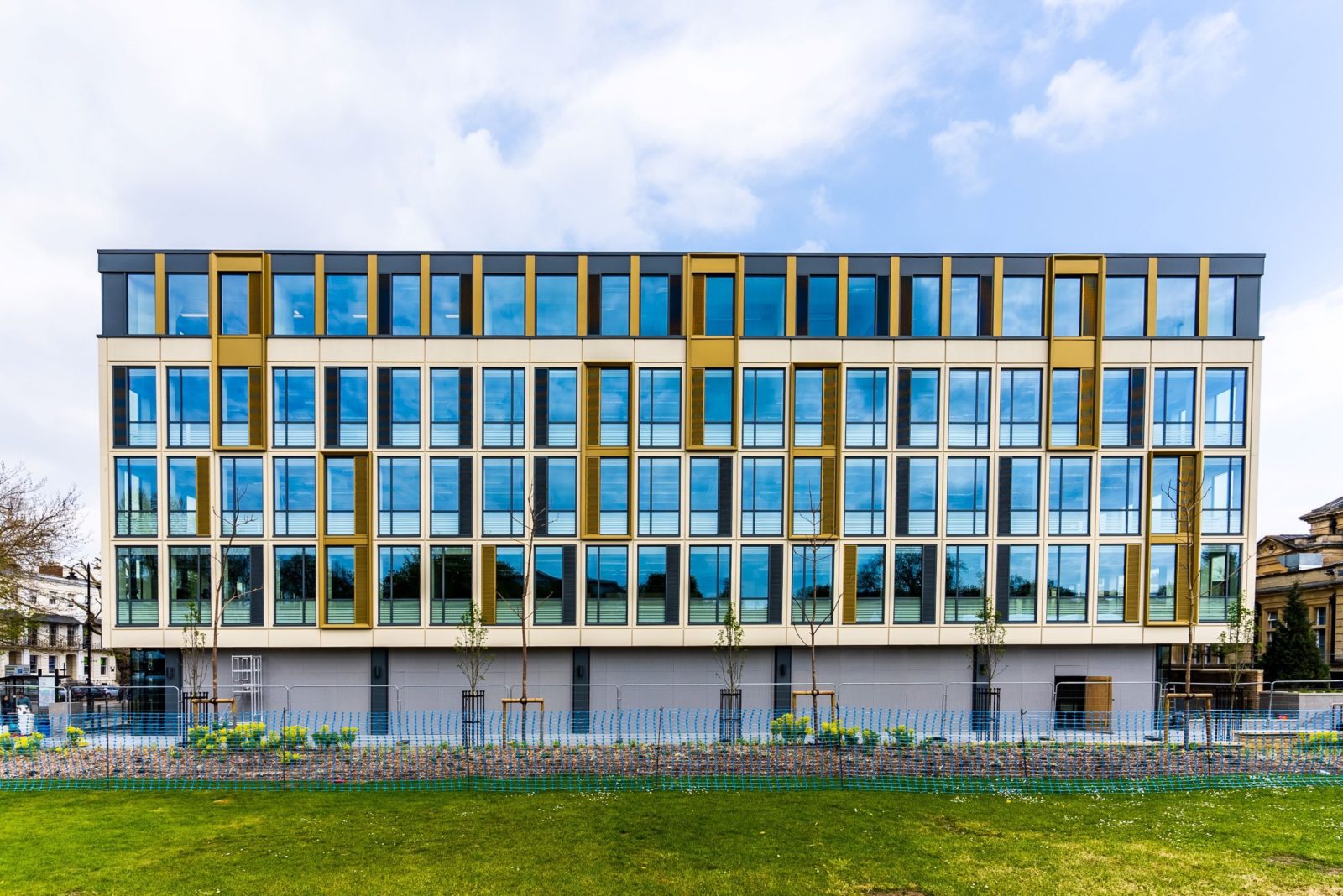 The Quadrangle building in the historic heart of Cheltenham, once a 1970s landmark, was transformed into a contemporary mixed-use commercial development featuring Aluk window, door and curtain walling systems.

The fenestration package was key to retaining the design language of the original building within a more contemporary aesthetic, while meeting the requirement for improved thermal efficiency, more natural light, and better natural ventilation.

The entire fenestration programme was carried out by Aluk fabricator Aluminium Sashes, which used its extensive experience in the repair and replace sector to overcome the challenges inherent in surveying, fabricating and fitting windows into openings which, in many cases, were irregular in shape and form and not aligned with the concrete slab finish.

Aluminium Sashes worked with Aluk at planning and detailed design stage to achieve the contemporary look for the facade that the client and architect wanted. For example, where the original windows had a transom and modesty spandrel panel below, the slimmer sightline replacements replicated the line of the transom but with fritted glass below to provide a similar level of privacy with more natural light.

It also designed a solution for fixing the anthracite grey windows to the metallic bronze louvre sections, specified to break up the uniformity of the facade, and to give users the option of manual ventilation and to provide fresh air and exhaust points for the AHUs.

The reinforcing bar in the windows effectively became the carrier bar for the louvres and gives the impression that there are two colours in one window panel.

Dan Basey, project architect at AWW, said: “Being able to work so closely with Aluk and Aluminium Sashes at both design and construction stages enabled us to realise such a successful project.

“The integration of the distinct colour palette and finishes was a key driver of the scheme. The metallic bronze finish works really well with the more neutral anthracite grey, while being sympathetic to the existing colour palette of the Regency-era buildings in the context of Imperial Square.

“An integration of both natural and mechanical systems to the rear of the windows’ louvre system is a simple but effective detail that seeks to improve the user-experience of those working in office spaces. This will hopefully become a well-used feature as more attention is given to improving the air quality of our internal workspaces.”

The fenestration choices were integral to the BREEAM Very Good rating which has now been awarded to the Quadrangle.

“The recyclable aluminium windows from Aluk contributed to a BRE Green Guide A materials credit, while the 1.4W/m2K U-values reduced the energy demands,” Dan said. “The glazed facade with integrated louvres helped achieve both the BREEAM HEA 01 Views Out and Daylighting and the BREEAM HEA 02 Indoor air quality ratings.”

Sean Anderson, managing director of Aluminium Sashes, said: “Lots of fabricators shy away from commercial repair and replace projects like the Quadrangle because of the complexities involved, but we actually thrive on the challenge. Even when we were faced with things like a downstand beam within the structural opening of some of the windows, which created a really awkward head detail, we were able to integrate areas of fritted glass to disguise it with ease.”

Visit www.youtu.be/HQPFSdiDC38 to see the project in more detail. 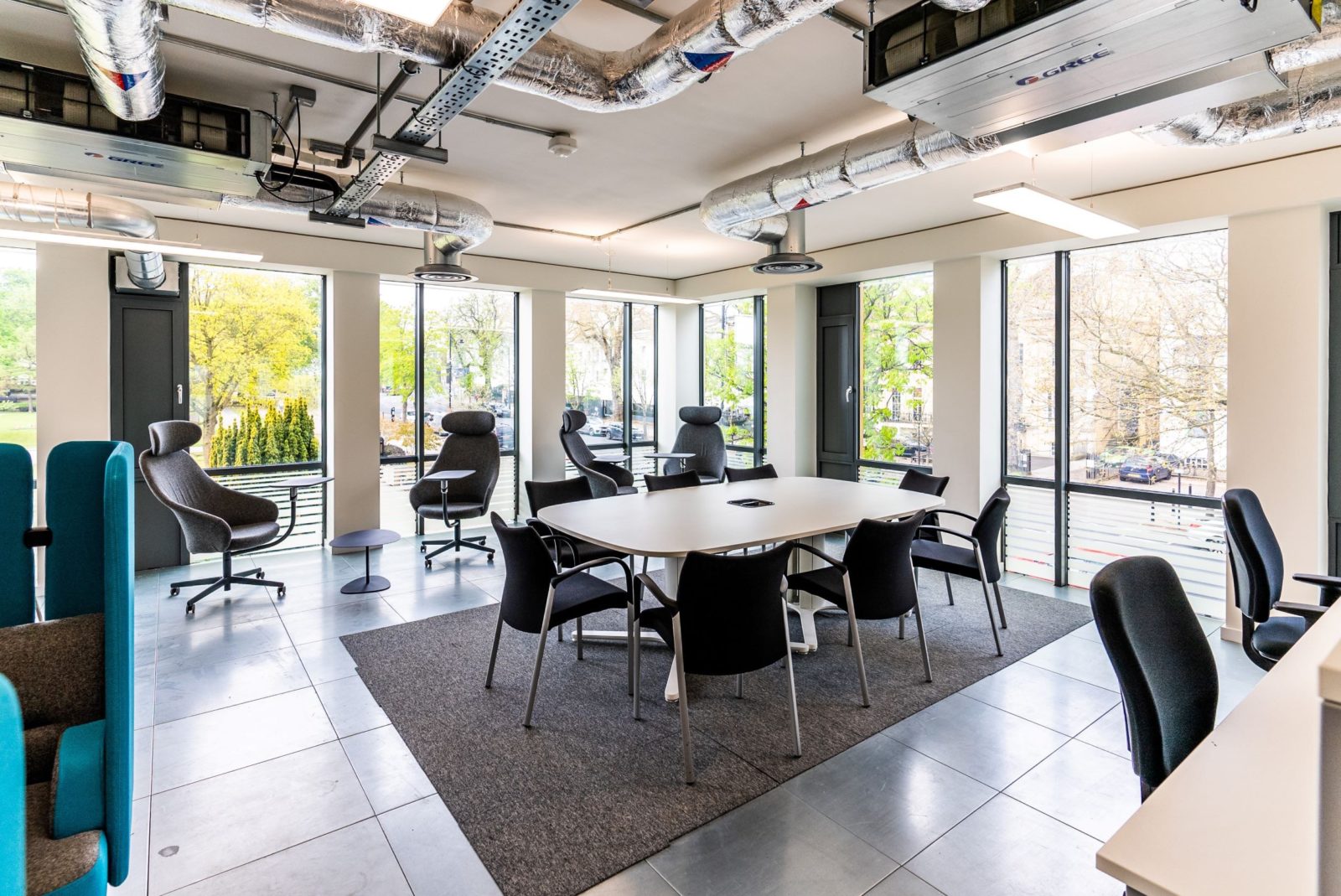 Why not subscribe to Glass Times?
Previous Could your business get through another 2021 in 2022? Next Breaking point