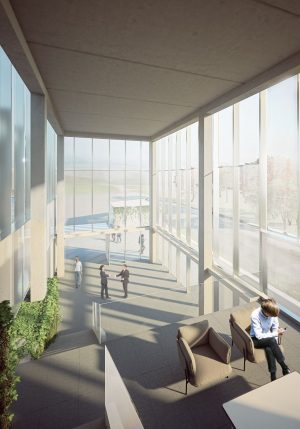 Exlabesa has claimed its ECW50 curtain walling system has gained popularity since its launch last year.

Paul Benn, Exlabesa’s national sales manager, said: “We are pleased the ECW50 is proving so popular but we are not surprised. It’s one of the easiest curtain walling systems on the market to manufacture and it’s also extremely competitively priced, which is a winning combination.”

The ECW50 curtain walling system has 50mm profile widths so it has the slim sightlines of a classic aluminium system. It’s suitable for use on a wide variety of commercial building projects and can be integrated with Exlabesa’s KWS window systems and KSF and KTS commercial door systems.

The ECW50 has 28mm glazing as standard but can accommodate glazing of up to 46mm for projects where thermal efficiency is paramount.

Why not subscribe to Glass Times?
Previous Record maintained Next Mechanically jointed VS