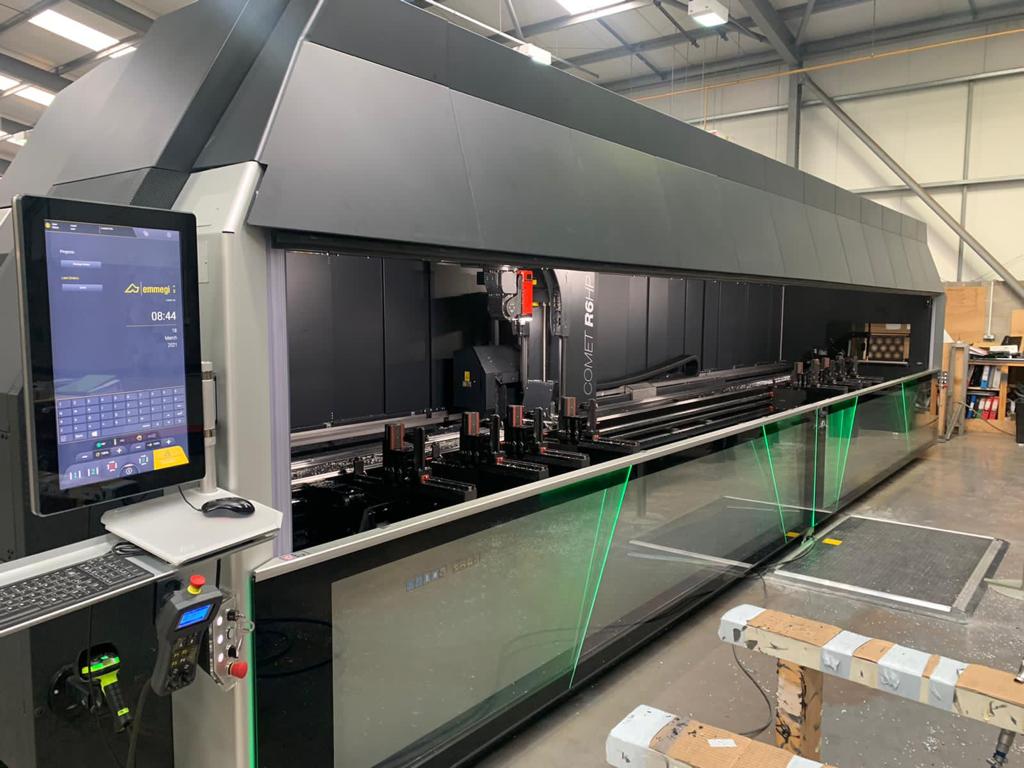 Denval Co can now take advantage of the accessible five-axis technology now available from Emmegi (UK) via its Comet R4i and R6i and HP machining centres.

Based in south Wales, Denval has just taken delivery of a new Comet R6HP machining centre as part of a capital investment supported by Paragon Bank and Premier Asset Finance.

The Comet R6HP replaced a three-axis CNC machine, which was in place previously and provides a greater degree of flexibility for machining on profile edges and on more complex shapes. It is suitable for large curtain walling profiles as well as window and door fabrication, so suits the wide product range that Denval fabricates from the likes of Senior Architectural, Aluk and Aluprof.

Alex Wysom, Denval’s operations director, said: “Within a week of arriving, the Comet R6HP was already showing us how much more capable it was than our previous machine. It lets us process large and small dimension pieces with exactly the same level of precision and with extremely fast axis speeds and removal rates.

“It also links seamlessly with the LogiKal software we use in our design office, so means we can automate more of our processes and increase efficiency and not just capacity.”

Andrew Jones, Emmegi’s sales manager, said: “Denval is a great example of where the five-axis technology offered by the Comet range really comes into its own. The company was initially looking to replace an existing three-axis machine which had reached the end of its service life, along with purchasing a new notching saw to increase its cutting capacity. But when I met with the team and explained all the additional benefits they could get from investing in a five-axis machining centre that could both cut and machine, they were on board with a single machine solution without hesitation.

“The multi-piece/pendular feature of the Comet R6HP with independently controlled clamps gives a much faster throughput than you can achieve with equivalent four-axis machining centres, and means the payback on these models is surprisingly quick.”

Alex added: “The advice and service we received from Andrew Jones and the team at Emmegi was invaluable in helping us select the most suitable machine for us. They arranged for us to view a similar Comet R4i model in action and being able to see the five-axis technology in use at another fabricator was a real help. It meant we could see and hear for ourselves just how much payback we would get from our investment in a real-world setting.

“We were also pleased that they recommended a fully soundproofed cabinet for the machine because it’s already a big benefit for our production teams.”