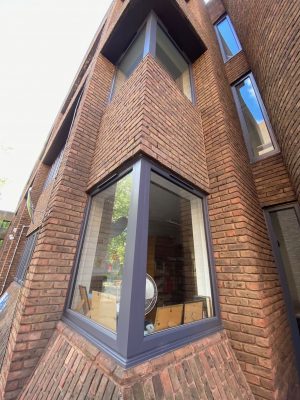 Ahead of the ongoing consultation around changes to Part F of the Building Regulations in England and Wales governing ventilation, The Window Company (Contracts) has begun upgrading its installations with uprated trickle vent solutions.

The commercial window and door specialist has switched to the new generation of 5,000mm2 trickle vents for all of the windows it now installs, so that it can easily comply with the draft recommendations in the consultation document, which are likely to come into force in June.

The consultation has set out plans for new-build homes so that they can reach the proposed Future Homes Standard by 2025, as well as increasing the energy efficiency of all new homes from 2020. It requires a minimum equivalent area of background ventilation for houses of 10,000mm2 in habitable rooms, and 5,000mm2 in kitchens and bathrooms. For flats and bungalows, the minimum requirement is 12,000mm2 in habitable rooms, 8,000mm2 in kitchens and 5,000mm2 in bathrooms.

In response, The Window Company (Contracts) has taken advice from its trickle vent supplier Glazpart to ensure that it is only fitting 5,000mm2 units or multiples thereof on all new-build and replacement window projects from now on. (Previously, 2,500mm2 and 4,000mm2 have been the default option.)

Chair of the company David Thornton said: “There is certainly very limited awareness among the majority of our customers in the new-build sector, and with so many other issues to deal with now, I hope it’s reassuring for them to know that we are taking steps on their behalf to ensure that all of our installations will be fully compliant.”

Why not subscribe to Glass Times?
Previous Factory award Next Starting over on Bristol project