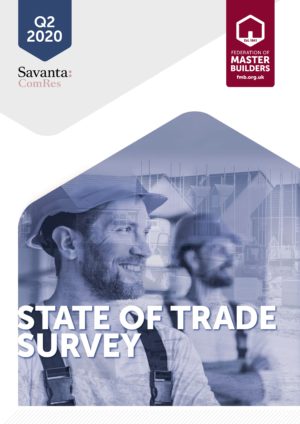 Strong levels of consumer demand for repair and maintenance works saw builders report a busy summer, according to a new survey released today by the Federation of Master Builders (FMB).

Brian Berry, chief executive of the FMB, said: “Builders’ workloads bounced back in the summer, as pent up demand for home upgrades and more domestic space fuelled activity. However, builders in other sectors are struggling, especially those working on social new build housing and on public buildings.

“To sustain recovery in the private repair, maintenance and improvement sector a national energy efficiency retrofit strategy is needed that will not only generate thousands of new jobs across the country but also help the government’s commitment to create a greener economy.

“With a healthy proportion of builders forecasting higher workloads in the autumn months, and almost one in five looking to recruit, there is clearly a demand for new jobs in the industry. Young people taking their next steps after school should consider an apprenticeship in construction, and those seeking a career change will also find new opportunities.”

Brian also said that material shortages and material price rises are continuing concern for builders, especially in the lead up to Brexit.

Why not subscribe to Glass Times?
Previous Commitment and focus Next Demand increase despite threats