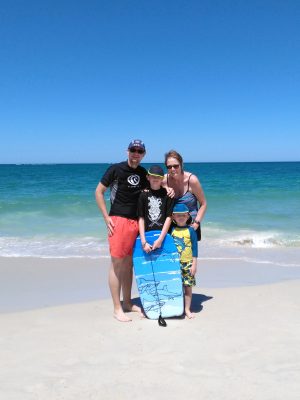 A former member of the team at SupaLite recently appeared on the BBC television series Wanted Down Under, charting his family’s move to Australia.

Steve Hargreaves, who worked as a graphic designer for the Preston-firm, appeared on the popular series to see how feasible a dream move to Australia really was. The premise of the show gives prospective expats a trial week in Australia, where they can explore housing, job opportunities, the lifestyle and the realities of living down under.

Steve said: “For me, it’s been a dream for decades to swap Preston for Australia, and I’m delighted we were able to go on the show to find out if it was even possible. Of course, it was really hard to leave family, friends and colleagues behind, but we are absolutely loving life here in Australia.

“While we didn’t enjoy seeing ourselves on screen, it was such an amazing experience filming the show and I’m so glad we did it. We are really grateful to Steve, Dave and the whole SupaLite team for their support throughout this process and in our move abroad. I’ve thoroughly enjoyed my time working at SupaLite and will certainly miss working with the team.”

Steve Hacking, managing director of SupaLite, said: “I’m absolutely thrilled for Steve and the family that their dream move to Australia finally became a reality. It goes without saying that we are really sad to say goodbye to Steve, who has been such a fantastic and dedicated member of the SupaLite team for many years. We are all incredibly jealous and wish the Hargreaves family the absolute best in their new and exciting adventure.”