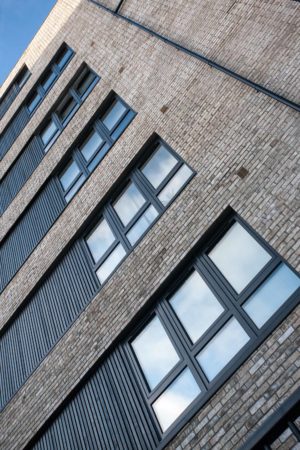 Sidey recently manufactured and installed over 200 flush tilt and turn windows for a low-rise, contemporary new apartment block in Edinburgh, which forms part of Places for People’s Waterfront 3 development.

Waterfront 3 is the third phase of a high-density development, and the wider development provides a total of 89 mixed-tenure homes across a 0.9-hectare site.

Mike Rutland business development manager at ModularWise said: “This was a fairly unusual development in that it mixed traditional build with modular. The ground floor of the scheme was built using traditional construction methods and consists of seven apartments, while the upper three floors consist of 27 modular apartments.

“The Spectus flush tilt and turn windows were chosen for the project because they combine contemporary looks and large aperture with high performance, including low U-values of 1.4W/m²K. We also took full advantage of the Spectus design service, which includes wind and barrier loading, ventilation and acoustic requirements.”

Sidey installed the windows of the traditionally built ground floor on site, and the rest to the modules in ModularWise’s factory in Wales.

“Once the traditionally constructed ground floor was completed, the modules were transported to site by lorry and delivered a floor at a time,” Mike said. “The landing sequence was completed over a four-week period – a significant time saving versus traditional construction.”