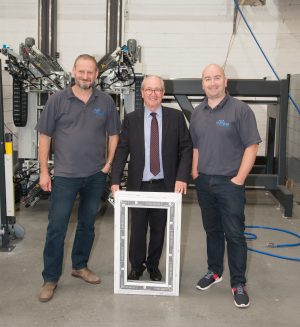 When the first Kommerling frames came off the production line at Genius PVC Trade Frames in Norwich, they were headed directly for a large-scale commercial refurbishment project carried out by The Window Company (Contracts) for Chelmsford City Council.

Chairman David Thorntonwent along to see the frames for himself and to congratulate Pete Dyson and David Eagle, the two men behind Genius, on their new venture.

He said: “We had worked with Pete and David and their production director Steve Wood before when they were at one of our existing suppliers, and had always been impressed with how they operated and how they looked after customers. As soon as they announced the launch of Genius, we were keen to work with them again and, at the same time, to add another Kommerling fabricator to our list of partners.”

“Quality and value are important to us, but it’s also essential that every fabricator who supplies us understands the demands and the constraints of our commercial world,” David said.“It is a mark of the confidence we have in Genius and in the Kommerling team who are also supporting them that we chose them so early on to supply the windows for this high-profile contract replacing windows in Chelmsford City Council’s own offices.”

Pete Dyson, sales director at Genius, said: “We’ve taken our time to create what we believe is the ideal set up here for trade, retail and commercial customers with high specification frames, precision manufacturing, lots of capacity and great customer service.”