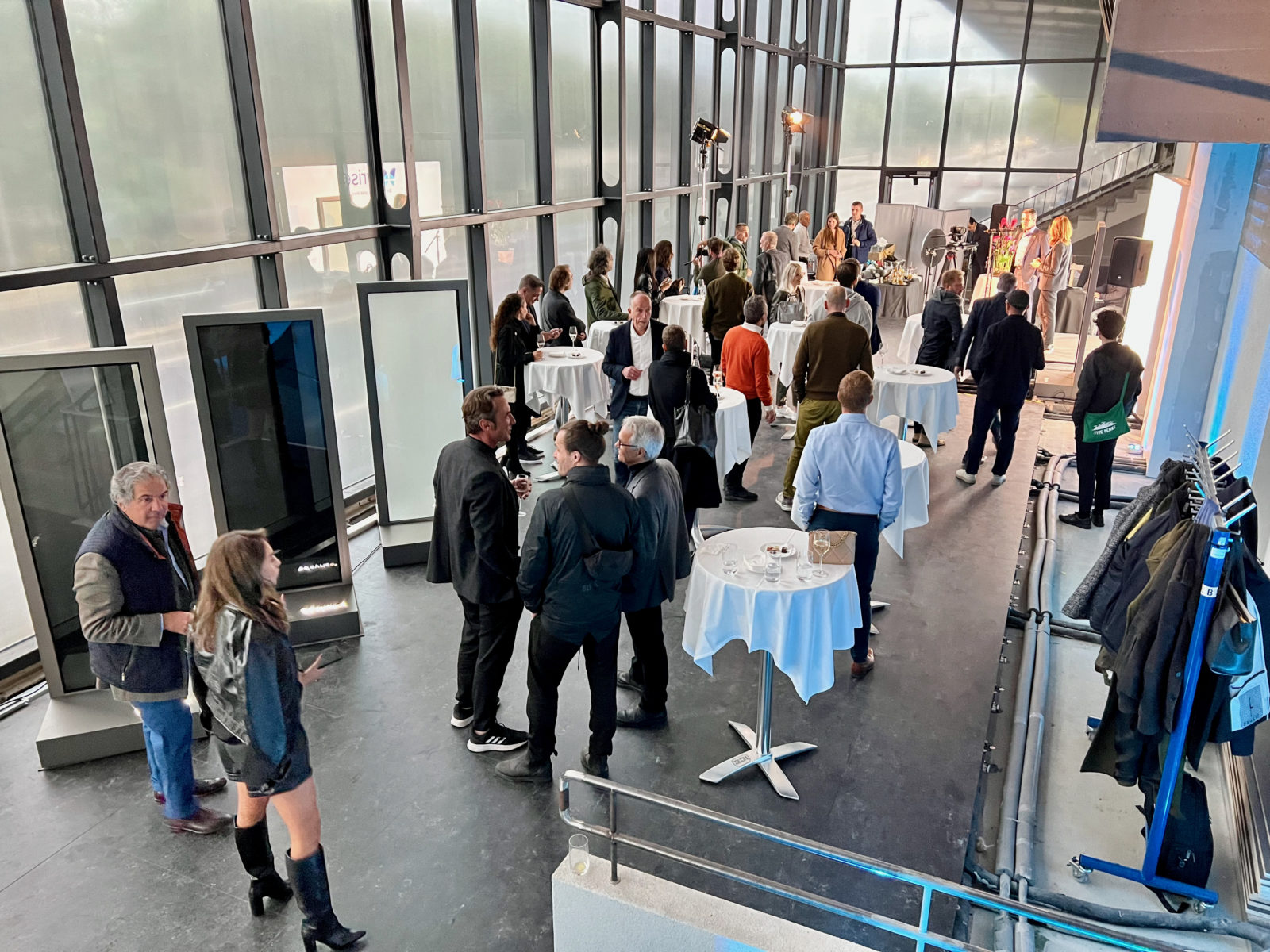 Eyrise has transformed a historic Berlin landmark with a dynamic glass facade, using liquid crystal technology to provide benefits during the day and at night.

The dynamic glass specialist partnered with Avus Tribüne to glaze a new event centre that forms the centrepiece of a repurposed racetrack grandstand overlooking the A115 autobahn in Berlin, providing instant solar shading during the day while protecting drivers from distracting outward shining interior light at night.

Previously known as the Avus (Automobile Traffic and Practice Road), the A115 was originally designed as a test track for the latest advances in auto engineering by companies such as Mercedes-Benz, Opel and Auto-Union (now Audi).

Opened in 1921, time trials were held here until 1999, and on non-race days the road was open to the public for a fee. Considered to be the world’s first toll motorway, the road is now used by 34 million vehicles each year.

Built in 1936 for race officials and spectators, the Avus Tribüne, or grandstand, which fell into disrepair after racing ceased, recently reopened as a media company headquarters following its renovation.

“The Tribüne lies less than 50cm from busy traffic, so its facade needs to be able to withstand a variety of challenges including extreme noise, traffic distraction, suction and compressed air forces,” Hamid Djadda, owner of Avus Tribüne, said.

“The structure is also a listed historic monument so conventional glass and mechanical blinds were not permitted by the local authorities, and it was only by using Eyrise’s innovative glass technology that the project could succeed. We have been able to create a striking piece of architecture which gives visitors a unique viewpoint over the motorway, while ensuring the safety of drivers.”

Eyrise designed a bespoke glazing solution for the facade. 93 panels were installed to encase the 226m2  glass structure of Avus Tribüne’s event centre, each comprising four separate panes bonded together to form an insulating glass unit. As transparent dynamic glass would have been unsuitable, the outer pane was etched to create a matt surface that eliminates the blinding reflection from car lights and sun, while a screen-printed pattern was integrated into the inner pane, creating a slightly opaque digital ‘curtain’ effect that reduces light disturbance to motorway users.

“The Avus was conceived as a place to introduce ground-breaking innovations, and this continues today with the use of advanced facade technology in the renovation of its grandstand,” Celine Glipa, CEO of Eyrise, said. “After years of neglect, the unique vision of the owner has breathed new life into this iconic Berlin landmark.”

Glass Times attended an open day in October at the Avus to celebrate the glass panels’ installation.

Architects, specifiers, and building owners discussed how modern buildings needed to be more dynamic to fully meet the needs of their occupiers.

“Humans needs light,” Celine said. “We are seeing more glass boxes built, and quite often they are too hot, and we see blinds everywhere.

“This project really stood out because we usually help clients reduce sunlight inside the building. However, here we had to reduce the light leaving the building.”

Also attending the event were two PhD students from Cambridge University and Delft University of Technology who had designed an artificially intelligent facade that could tell when people were squinting, and adjust the shading using Eyrise technology, thus proving that buildings could interact intuitively with its occupants 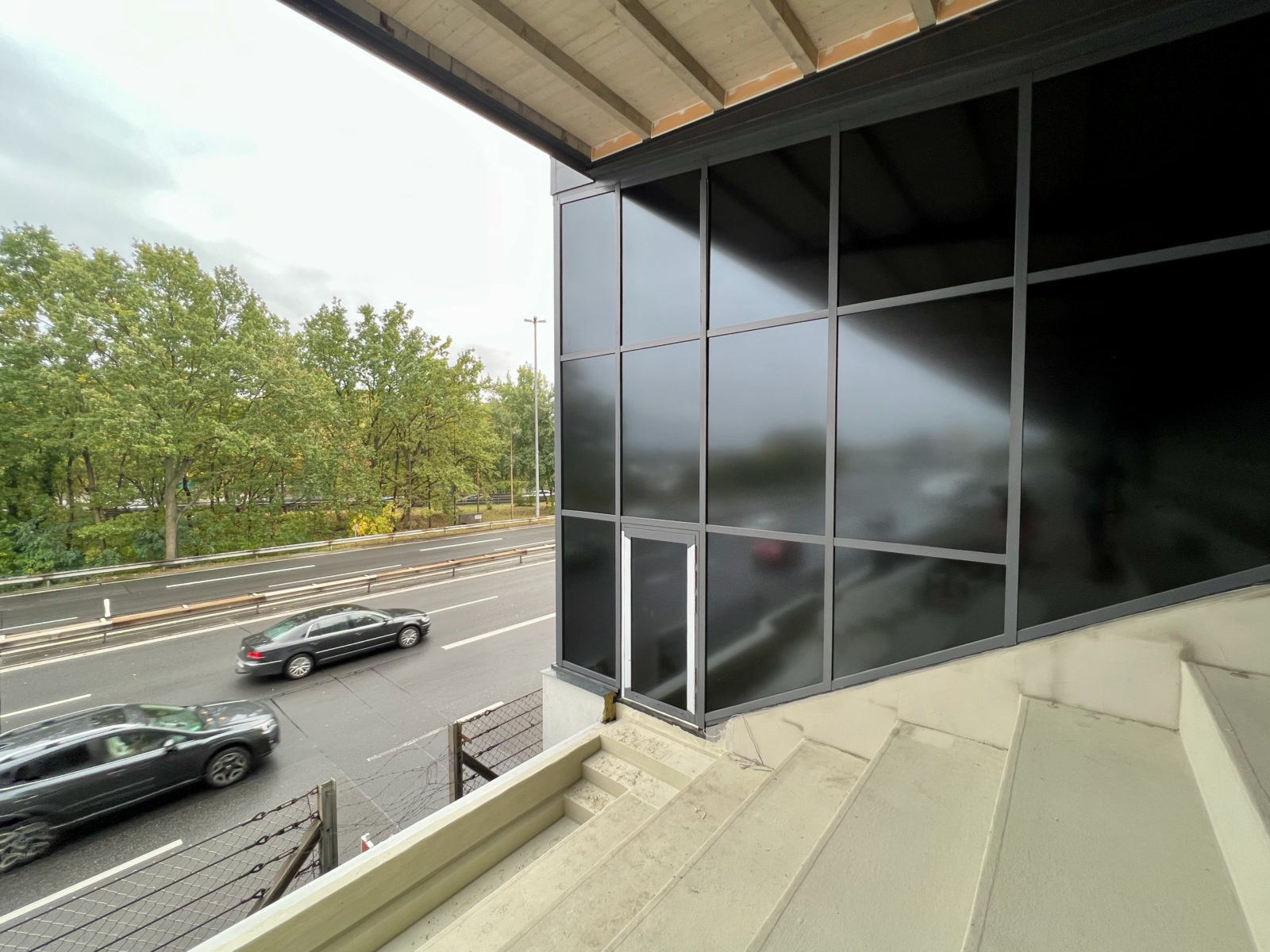