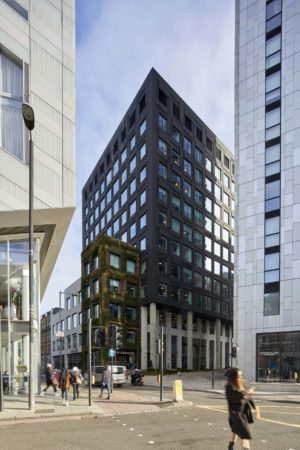 Bespoke curtain walling by Kawneer was chosen for an 11-storey office building at the heart of London’s architectural sector.

Kawneer’s AA265 unitised system was adapted by the company for the commercial element of the £200 million Atlas building; at 40 storeys the tallest tower in London’s Tech City area, at 145 City Road, Clerkenwell.

Concept-designed by Make architects and delivered by the Design Delivery Unit of Scott Brownrigg, the commercial building featured three types of Kawneer’s curtain walling: the traditional stick system AA110 (zone drained) on the ground floor; the adapted AA265 on the floors above; and standard unitised AA201 on the tenth floor return elevation to the existing building.

The adapted AA265 modular system incorporated GRC and aluminium rainscreen cladding and glazed vision areas in each panel. Some 3m wide, 3.85m high and one tonne in weight, each unit was delivered to site and hoisted into position by a tower crane, complete with the cladding and glazing in place. 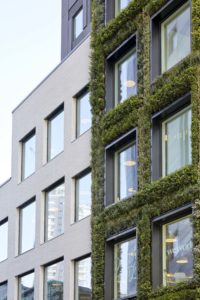 Kawneer’s technical proposals engineer Dave Fletcher said: “The basic AA265 design was revised to accommodate the building movement that had been identified by the structural engineers as it could accommodate the size of units and the GRC rainscreen units being pre-fixed to the panels.

“The system developments, including new profile and accessory design such as 19 project-specific dies, were all carried out by our technical department at our head office.”

The Atlas commercial element is occupied by WeWork and features a strong emphasis on nature, with three roof terraces and external green walls.

Along with the Atlas tower, the WeWork building sits above the London Underground and Thameslink lines. This discovery at planning stage changed the concept for the structural strategy, resulting in the creation of a new superstructure design to prevent the buildings from twisting and leaning.

Loads imposed by the buildings are kept clear of the tube tunnels by cantilevering the structures over the subterranean Victorian engineering. The mass provided by the frame, and by increasing the thickness of the ground-floor and mezzanine first-floor slabs, helped give the structure sufficient inertia to dampen the ground-borne vibration from the underground trains.

The original planning concept was for a series of white and off-white shades of terracotta cladding. However, with the stability issues raised at post-planning, the weight of the terracotta posed a challenge with the cantilevered building.

Design Delivery Unit at Scott Brownrigg demonstrated options that could be achieved using anodised aluminium, and following modelling and testing of the material, proved that given the scale, repetition and shape of the facade, a unitised system would work and still achieve the original vision.

Why not subscribe to Glass Times?
Previous Waterside views Next Large scale investment