Preparing for a connection 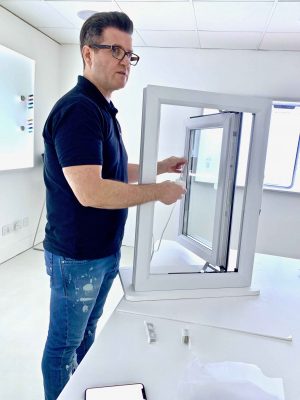 Would you buy a TV that wasn’t HD ready? Giovanni Laporta believes that very soon homeowners won’t buy windows and doors that aren’t Smart Ready either, and has come up with an offer that fabricators shouldn’t be able to refuse. Glass Times editor Nathan Bushell met Giovanni to find out more.

Smart Ready is a brand that has hit the industry hard in recent months, thanks to a teaser campaign and a stand at the FIT Show. It was created by Giovanni Laporta who believes the UK window and door industry should benefit from the estimated £10.8 billion spend on smart home devices in 2019.

Crucially, Giovanni already owns a hardware company (SAC) and a technology company (Hug), so is arguably best placed to devise a brand that would allow homeowners to connect with their windows and doors via their phones.

Giovanni wants to turn the home smart, but doesn’t want to do it at the expense of the hardware that was already designed. He is also aware of the pressures already on window and door fabricators, and knew that any solution had to be easy to incorporate into the manufacturing process – that, and cheap. 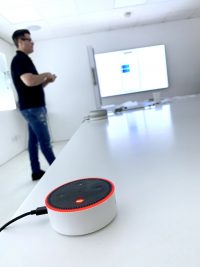 “Actually, the best solution for fabricators is a free one,” Giovanni said. “All they physically have to do is make a small adjustment to the hardware and fix an ID QR code sticker on a door or window. Following which, the door or window will be Smart Ready, and installers can then sell the benefits of this to the homeowner.

“Side by side, the Smart Ready door or window is no more expensive than a non-Smart Ready window, but the homeowner will be able to upgrade the Smart Ready one, which will open up a world of benefits.”

The upgrade comes in the form of a Smart Ready sensor, which will be sold at cost. Giovanni explained that the value to him will come through Hug, which will sell subscriptions to the service.

“Smart Ready in and of itself isn’t very tangible,” Giovanni said. “The point is that homeowners will view this as a technological leap forward because they will then be able to upgrade their windows and doors when they are ready.

“It also means the fabricator doesn’t have to get involved with the electronics, or the servicing, or the guarantee. Instead, they will benefit from a massive marketing campaign that will put Smart Ready front and centre of the modern home.”

Giovanni said that he wanted to launch Smart Ready in the fenestration industry first because it was something he was familiar with thanks to SAC, but he has plans to roll the concept out to other sectors, which will present homeowners with an opportunity to fully control and monitor their homes.

So, what does Smart Ready actually do?

Smart Ready is a new certification standard for smart appliances, much like HD Ready is to TVs; companies follow some minimum requirements to be able to use the logo.

“The benefit of Smart Ready acts as a stepping stone between a passive system and an active system,” Giovanni said.

“The idea is not to front-load the cost of the appliance; you are preparing, in this sector, windows and doors so they can accommodate sensors in the future. Therefore, Smart Ready won’t lose its relevance because it allows people to adopt smart tech at their own pace.”

Once the door or window is installed, homeowners can buy and install the sensor, which is then calibrated via a smartphone app.

“The installation is really simple but it took a long time and a lot of investment to get there,” Giovanni said.

The sensors (made by Hug) can then tell the homeowner which window and door is open, if it is marginally open, or even (with windows) if they are on the night vent setting – now known as ‘Air Mode’. Sensors will also alert homeowners if they detect a small impact similar to that of a burglar trying to gain entry. This way, the system can act as a burglar alarm, which is cheaper than traditional alternatives. The system can even prompt users to close windows if they suffer from hay fever when pollen count is high outside.

Giovanni also said that broad appeal was key to the concept’s success.

“I’m not even remotely interested in dealing with the niche market,” he said. “This is designed for the mass market.

“Smart Ready (to full blown smart) is another reason for homeowners to replace their doors or windows. After all, using sensors described for reporting and monitoring is a huge market – look at the amount of time people spend on Facebook, looking at their updates and statuses.”

Despite plans that Giovanni has for Smart Ready, he reiterated a key point about the system.

“The take up by the homeowner is not really a concern for the fabricator or installer,” he said. “This is about spreading the Smart Ready idea, which will benefit from a significant marketing campaign. If technology is properly demonstrated then it sells easier.”

You can find out more about Smart Ready on stand M20 at the FIT Show.

Why not subscribe to Glass Times?
Previous Talking about a virtual revolution Next Think locally but sell globally