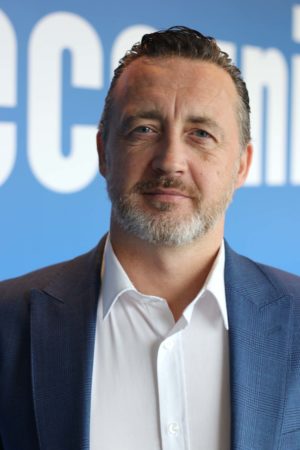 “If a door won’t open or close properly, if the weather sealing fails, or the locking mechanism sticks because it’s bowed, installers are going to get call backs, and that costs, with the installer, not the manufacturer, picking up the bill,” Nigel Headford, business development director of Deceuninck Aluminium, said.

Out-of-tolerance doors are a problem at point of installation. Bowing carries significant potential to impact on the performance locking mechanisms and seals, something which according to Headford, becomes almost impossible to plan for because of variations in temperature.

“Doors can be adjusted,” he said. “The problem is how do you adjust and set up a door correctly when its bowing and contracting in line with temperature change? Dependent on the aspect and the time of the year temperature variables even in the UK can be massive.”

Nigel said call backs are costing installers £thousands each year in lost time for fitters to go back to problem doors.

“It’s not as simple as counting up the time lost in travelling back to a job and making an adjustment,” he said. “It’s the time that that fitter isn’t earning on new billable work.”

The Decalu88 Entrance Door, launched by Deceuninck Aluminium in autumn 2020, claims to offer a solution, with maximum bowing tolerances of only 2.5mm.

This is achieved through Deceuninck Aluminium’s use of a patented thermal stress control system to accommodate change in temperature without impacting on door alignment. Something that Nigel argues puts an end to costly call backs.

“At 2.5mm movement in the door is minimal,’ he said. “It doesn’t impact on its operation of the door.”

Decalu88 also features special ABS inserts that adapt to temperature change allowing the internal and external faces to expand and contract independently of one another, limiting bowing to a maximum of 2.5mm – even in extreme heat.

“The internal and external faces aren’t fixed, they can move,” he said. “That prevents the build-up of tension in the door slab.

“Think of it as rather than trying to stand there and absorb a direct hit. Decalu88 rolls with the punches, in this case extremes of temperature, and back into position.”

The Decalu88 Entrance Door has gone through a rigorous testing programme, far exceeding the extremes of temperature it is likely to see here in the UK. This includes testing to 80°C.

“That’s an extreme we’re unlikely to see here in the UK,” Nigel said. “That said, our summers are getting hotter. We’ve seen temperatures hit the high 30s throughout the summer, and that’s enough to lead to bowing in many dark-coloured doors on south-facing elevations.

“With Decalu88 to the door isn’t going to move. The adaptation happens internally and keeps the sash, lock and keep, aligned.”

The system also works in reverse, so that even on the coldest day deflection in the door is limited to no more than 3.5mm at temperatures as low as -30°C.

“These are extreme tests. And even then, the movement in the door is kept to acceptable levels which won’t impact on performance, operation and weather sealing,” Nigel said. “Our summers and winters aren’t in the same space. The movement you’re going to see here in the UK is almost non-existent; we’re talking fractions of millimetres.”

In common with the other doors in its range – the Decalu88 Bi-fold and Decalu163 Lift-and-Slide doors – the Decalu88 shares a focus on design flexibility. This includes a sash weight of up to 150kg.

With ultra-low maximum bowing tolerances, limitations on door design are removed. This includes the specification of dark colours on south-facing elevations.

This core stability also means that it achieves high levels of weather performance and sealing. This means that in addition to its standard door, Deceuninck Aluminium can also offer a contemporary flush sash option across 21 styles, in addition to 30 insert panel options. These are available in any RAL finish.

“The appeal of flush finish options is massive,” Nigel said. “We see it across materials, in windows and now doors. If you’re going for that flush finish you’re by definition more reliant on the seal and compression. The stability and low tolerances that the Decalu88 delivers means that we can offer a flush sash without compromising on performance.

Why not subscribe to Glass Times?
Deceuninck Ltd Read Full Profile
Get In Touch
with Deceuninck Ltd
tags
Brian BerryDeceuninckFMBHousing targetsnew homes by 2020Rob McGlennonRoy FrostSales director
Previous In a world of widgets Next Engineered for confidence