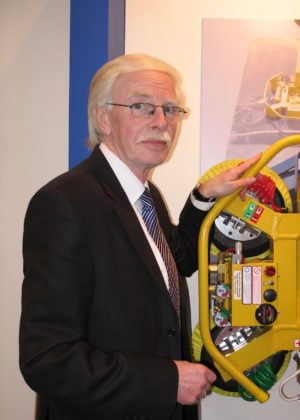 Bohle has announced that former national sales manager Nelson Graham passed away on the evening of Monday September 20.

Nelson was well known and respected throughout the UK and Irish glass and glazing industry. In a career spanning 26 years, Nelson was initially employed in April 1987 as commercial manager for Berlyne Bailey and Co and, following the subsequent acquisition by Bohle Group, served as national sales manager of Bohle until his retirement in March 2013.

Nelson was born in Cambuslang, a coal and steel town where his family ran a haulage business. As a talented artist, he had received an offer to join the prestigious Glasgow School of Art, but with pressure to join the family business Nelson decided to make his own future in sales.

His early career saw him selling plant and equipment in the Middle East. Nelson later applied his strong technical background and great negotiating skills to the business of selling machinery for Bohle. Very much a people person, he forged strong relationships with glass processors throughout the UK and Ireland, but in his home country of Scotland in particular, where he would say “I speak their language”.

Bohle Group COO Arne Klöfkorn said: “Nelson was a very special person and for sure one of the figureheads of Bohle. For those who got to know him, he left a permanent impression.”

Dave Broxton, MD of Bohle, said: “My lasting memory of Nelson will be of his last exhibition at Glasstec 2012, where we were celebrating his career with a party on the stand, but all the time he was still trying to sell a drill to a customer. He was a great salesman but also a true and loyal friend who will be sadly missed.”

OnLevel’s Gary Dean said: “I had the pleasure of employing Nelson during my time at what was then Bohle Berlyne and subsequently Bohle in the UK. I recall Nelson very fondly as a really committed sales professional who loved selling the big-ticket items.

“When I took over, he was running the Framing Supplies department which, although he enjoyed, I saw he could do more, and through the ranks of sales manager and machinery sales manager he proved himself to be a successful builder of customer relationships with a great sales record.

“One time I even convinced him to have a regular piece in Glass Age, as it was then, called Nelson’s Column, and he loved the attention.

“A little guy, instantly recognised with a personally ten times his stature, he was a true character and a lovely man – and super company over a pint.”

Glass Times publisher Andy Westhead said: “It was an absolute pleasure to have known Nelson, and he was genuinely respected by all those who knew him.”

Nelson’s wife Dorothy passed away three years ago and he is survived by their daughter Heather and Dorothy’s family. Funeral arrangements are still to be confirmed at this time.

Why not subscribe to Glass Times?
Previous Office manager required Next What killed the green grant?