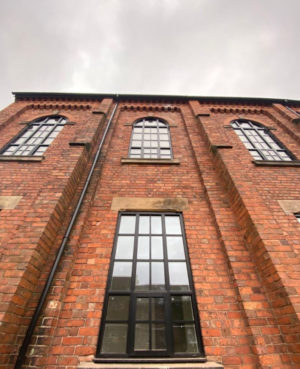 Throughout the project PWF worked with the local conservation officer, bringing part of the city’s rich heritage back to life. The Old Picture House scheme is being delivered by property development company Somerton Jones in a £5 million regeneration of the former Regal Cinema in Tamworth Street.

Birmingham-based PWF has also supplied and fitted a wide range of windows and doors at another Somerton Jones development: The Old Chapel in Fazeley, Tamworth. The company delivered windows that were in keeping with the original arched steel windows.

The distinctive red-bricked building overlooks the Birmingham and Fazeley Canal, at the heart of the UK canal network, and all the apartments have canal views.

Alex Sutherland, managing director of PWF, said: “Our design team and fabricators were challenged to create windows and doors that complemented the heritage of the unique properties. We delivered products that have really enhanced the developments and we are delighted with the results.”

Why not subscribe to Glass Times?
Previous Success despite challenges Next High praise