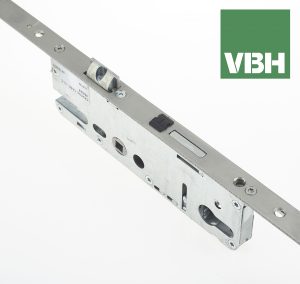 When the door leaf is closed (or slammed) into the frame, the automatic lock mechanism instantly triggers the security latches, which engage into the striker plates. This negates the need to lift a lever to throw the locking points prior to dead-locking through the key. The door is opened by turning the key, which retracts the latches and central deadbolt.

AutoEngage’s locking action allows greater flexibility in door design, whether on traditionally styled doors where a knob might be used, or on modern styles that lend themselves to the clean lines of stainless steel pull handles, such as those in the greenteQ Coastline range, VBH said.

The locks are available with a choice 35mm or 45mm backsets and a range of 16mm or 20mm faceplates, including a 20mm radiused end version.

VBH marketing manager, Gary Gleeson, said: “As well as the AutoEngage Classic, with its main lockcase at waist height, manufacturers can also opt for the Heritage version that has a high level lockcase to replicate the position of traditional rim latches. Yale is one of our respected third-party brand partners with a great pedigree, and its products complement our own greenteQ range. In this instance, AutoEngage works perfectly with the greenteQ selection of stainless steel pull handles, cylinder escutcheons and cylinder pulls in six colours.”