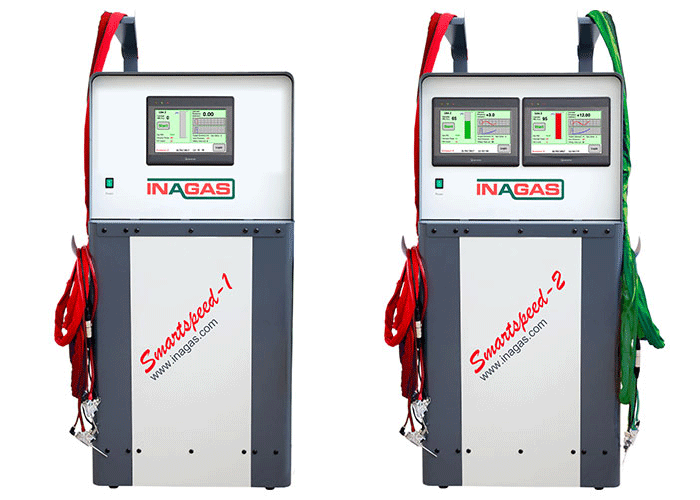 Chris Kemp from Inagas explains how evolution, not revolution, is changing the world of IGU gas filling.

SmartSpeed builds on both the success and the technology of our SmartFill system. But with SmartSpeed the clue is in the name – it has been designed for high speed argon gas filling.

There are two models in the range: the single line, single screen SmartSpeed 1; and the dual line, dual screened SmartSpeed 2. Both feature internal IGU pressure sensors on the lance, which allows the system to regulate the variable filling speed between 70 and 85 litres per minute, to ensure a fast, pressure-balanced, accurate gas fill.

To put that into context, at 85 litres per minute the flow rate on the new system is almost three times that of SmartFill. The result is that SmartSpeed fills a standard 1,000mm x 1,000mm x 16mm test IGU in 40 seconds, compared to 95 seconds with SmartFill. This means that each line will fill an IGU in less than half the time is used to take. And on SmartSpeed 2 that flow speed is per line, not combined. So, when both lines are filling you can get a rate of up to 170 litres per minute.

We’ve also made sure that the new system uses some of the key innovations from previous systems that we know our customers love. The system is operated using the same 250mm touchscreens as before, which give a live display of the gas filling process and IGU pressure as well as access to all the various settings and controls that are available.

The Data Logging and Print features are also included as standard. And perhaps most important of all, we’ve included SmartStart as standard, which allows operators to start and stop the filling process directly from the interactive lance rather than having to return to screen each time.

Through our customers we identified that on-line gas filling could be a bottleneck in a fast moving IGU line. To get around it you used to need more gas fillers, which is expensive and takes up more space in a busy factory. In response to customer needs we developed a faster system, and overcame the numerous obstacles that faster filling presented.

Why not subscribe to Glass Times?
Previous Visionary glass Next Natural touch