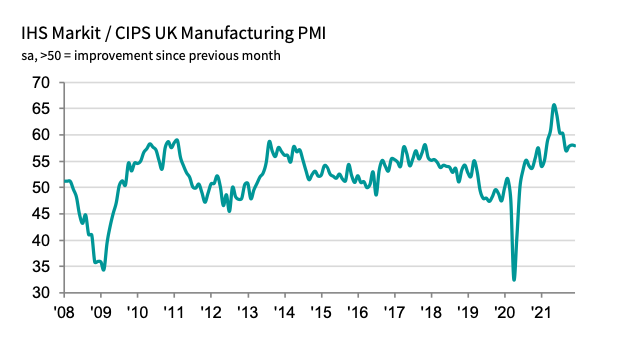 The manufacturing sector saw further growth of production, new orders and employment at the end of 2021, according to the latest HIS Market / CIPS UK Manufacturing PMI survey.

Although a slight easing in supply chain delays helped lift output volumes and take some of the heat out of input price increases, logistic disruptions and staff shortages were nonetheless still disrupting the overall pace of expansion.

Output rose across the consumer, intermediate and investment goods sectors during December, with the overall pace of expansion improving to a four-month high. Increased output was underpinned by rising intakes of new business, as domestic market conditions continued to strengthen.

Manufacturing employment increased for the 12th successive month in December, with the rate of jobs growth staying close to November’s three-month high. Companies linked this to meeting improved demand, rising backlogs of work and efforts to address staff shortages. Capacity remained under strain, however. This was highlighted by a further increase in outstanding business, although the pace of expansion in work-in-hand volumes eased sharply to its lowest since February.

Companies maintained a positive outlook at the end of 2021. The majority of firms (63%) forecast that production would increase over the coming 12 months, compared to only 6% anticipating a contraction. Optimism reflected expectations of renewed global economic growth, planned investment and hopes for less disruption caused by COVID-19, Brexit and supply chain issues.

December saw a further substantial increase in average input prices, with the rate of inflation staying among the steepest seen in the survey history. There were reports of higher costs for chemicals, electronics, energy, food products, metals, timber and wood. Freight, shipping and air transportation costs were also higher, while ongoing supply disruptions, raw material shortages and issues relating to Brexit and COVID-19 also led to higher prices paid.

“On the surface there wasn’t much of a change in the sector compared to November but there was plenty to put manufacturers on edge about their prospects for the coming year.

“Purchasing by supply chain managers was at a four- month high as businesses tried to beat another near-record inflation rate for raw materials and ordered ahead of time in the hope of defeating future setbacks. Delay fears remained as supplier deliveries remained under pressure albeit to the least severe extent since December 2020. On the plus side, optimism remained as manufacturers were buoyed up by the strongest pipelines of new work driven by UK customers and employment levels rose for the 12th consecutive month to meet demand.

“We can’t lose sight of the fact that the UK economy took a significant hit and new variants and potential lockdowns threaten to impede much needed progress but at least the sector ended the last quarter of 2021 on a surer footing.”