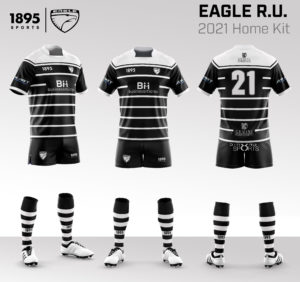 As professional and grass roots sports return to normal, Business Micros is putting more money into sponsorship of its local clubs.

The company already sponsors local under-nines’ football teams at both its Penpont head office and its Newton-le-Willows sales and installation office, and it has just been announced as the main shirt sponsor for Eagle rugby union club, based in nearby Warrington as well.

Business Micros’ relationship with Eagle RUFC goes back many years, from when business development manager Nick Bailey first played for the club’s Colts team in his teens. Since then, Business Micros has been a regular kit sponsor and, in the 2019/20 season, also sponsored the post protectors.

Nick says it’s important for businesses which have done well during the pandemic to look around at their local communities and give something back to those who have not been so lucky.

“Sponsorship is obviously good for our brand and for awareness of our business when it comes to both sales and recruitment,” he said. “But it’s also about doing the right thing and looking for ways that we can share some of our success.”

“Eagle is a long-established community club and, playing in the North West League’s third division west, very much a fixture in our local area. It’s close to my heart in particular so I’m really pleased that, as a business, we can help them get back out on the pitch at long last.”