Wake up to wood 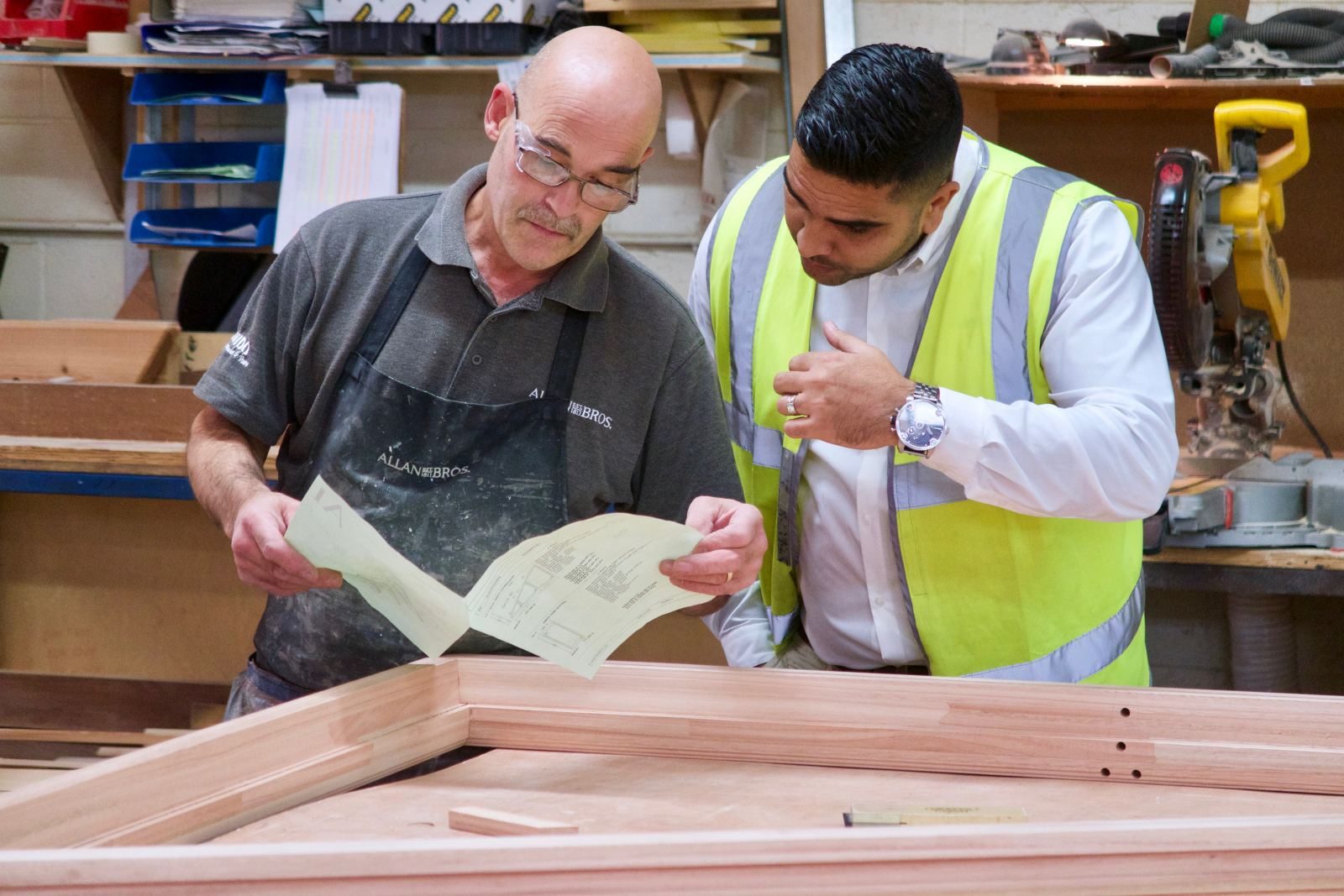 Allan Brothers wants to get the industry talking about timber. Glass Times editor Nathan Bushell visited the company’s site in Berwick-upon-Tweed to find out why.

When Glass Times visited Allan Brothers’ new showroom in Berwick-upon-Tweed recently, we discovered that the finishing touches were still being added the day before, and it was something of a grand opening.

“This showroom has been built over the course of 2017,” Allan Brothers’ sales director Wolfgang Gorner said. “It is currently only displaying timber products, but in time we will add products from across the Inwido Group, including PVCU and aluminium.”

However, the purpose of Glass Times’s visit to Berwick-upon-Tweed was to learn about the process of making timber windows, which forms part of a strategy by Allan Brothers to raise awareness of the market sector, and to demonstrate that there are numerous opportunities for window installers to sell the benefits of timber windows to homeowners.

A PVCU window fabricator entering Allan Brothers’ factory would certainly recognise the general process of manufacture, and much of that is now automated – certainly on the cutting and prepping side.

However, instead of the usual array of welders and corner cleaners, joiners assemble the myriad of parts using the knowledge they have acquired over many years.

One issue that Allan Brothers faces is the conditioning that many within the window industry have had from the PVCU sector, especially when it comes to lead times.

“Timber manufacture is bespoke, and more labour intensive than PVCU,” Wolfgang said. “We can replicate any style of window, and we do it with care, pride and a respect for traditional methods.”

Lead times at Allan Brothers sit at around the six-to-eight-week mark, but manufacturing processes are in the process of being improved, and the aim is to bring that figure down.

Coupled with this is a lack of knowledge by installers of the timber market, when it comes to supply. Industry reports and anecdotal evidence points to a growth in the high-end fenestration market. Currently, the aluminium sector is taking advantage of this and meeting the demand head-on; typically, PVCU fabricators are taking on aluminium expertise to run alongside their volume work.

The PVCU fabricators also have an established route to market, usually via installer networks and trade counters. The relationship between timber window manufacturers and installers, on the other hand, appears to be less established.

“This is the next stage of development,” Wolfgang said. “Previously, we have sold to the builders and merchants, whereas we want to start selling directly to the installers.”

The plan is to work with a select group of installers initially, especially those with showrooms, to demonstrate how a timber alternative can win sales.
“At the FIT Show, many people were surprised we were there, and surprised at the quality of the finished product,” Wolfgang said. “The first goal is to get people talking about timber.”

Wolfgang has a lot of experience in the PVCU sector, so he well-versed in how the best supply chains work. However, where PVCU profile extrusion, and streamlined PVCU window manufacture can easily be upscaled to meet an increase in demand, the same can’t necessarily said to be true for timber window manufacture. Not so, Wolfgang argued.

“The Inwido Group has timber window factories in all the markets in which it operates,” Wolfgang said. “Currently, about 50% of the windows that are sold in the UK are made in Poland – we have a lot of flexibility when it comes to volume.”

Interestingly, Wolfgang explained that Inwido was looking to acquire other businesses in the UK, but these were likely to be aluminium and/or PVCU. “There is plenty of room to grow the Berwick-upon-Tweed site,” he said.

Allan Brothers is certainly confident about its ambitions for the future, especially since it is backed by Inwido, which boasts a group turnover over £600 million, and an EBIT (earnings before interest and taxes) of 11.8%. Furthermore, the drop in the value of the pound is making it easier to sell UK-made products on their own turf, at a time when the PVCU and aluminium sectors are having margins squeezed thanks to high import costs.

“Few people are selling timber nationally,” Wolfgang said. “We want to be seen as the partner of choice because we offer a complete range of products and a professional service.

“The timber industry has not been proactive enough selling and promoting itself in the window sector. We want to change that and become a leading supplier in the UK.”

Why not subscribe to Glass Times?
Previous A commitment to quality Next Smart locking handle added