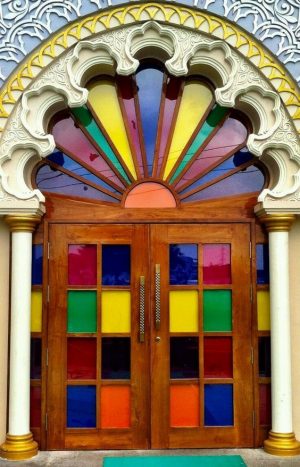 The UK may have spent more than two months in lockdown (and counting) but despite the terrible circumstances, the British public are finding beautiful, colourful ways to express their gratitude for NHS and key workers.

The loud, proud rainbow has become a symbol of solidarity, something previously used to support LGBQT rights. As someone who has openly expressed a love of colourful doors, I’m incredibly pleased to see that people are using their house fronts as a place to showcase that support (although admittedly, with lockdown in full swing, we are somewhat limited).

I’ve gathered some of the most charming examples which are enough to make even Joseph and his Technicolour Dreamcoat envious. 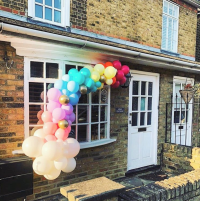 Scottish painter and decorator Andrew Aitken showcased a great way to show support for the NHS without actually causing any damage to the door itself: by painting the surrounding door frame in bright, bold colours.

Similarly, in Cardiff one resident decided to embark upon an excellent rainbow mural on the wall around the front door. The decor was well-received and the homeowner decided to continue on with the worthy task by hanging out of the upstairs window to transform the window sills into a matching rainbow. The entire facade is both eye-catching and heart-warming.

If painting the front seems a little daunting and permanent, plenty of people have opted for smaller, but no less colourful, outpourings of gratitude.

In Essex, one house has gone for a large display of colourful balloons which looks far more professional than a regular Sunday activity with the kids.

Much more achievable is the small-scale arts and crafts approach taken by one Reddit user who used pom pom balls and a glue gun to create a fluffy rainbow that’s sure to bring a smile to any passerby’s face.

The window inlays of doors have proven the perfect spot to mount a piece of cut-and-stick art, as showcased by Donna Buckland in Gloucester and Instagrammer Frische Brise.

Which, of course, comes as no surprise, as both myself and Dootco have been exploring the potential of some striking glass designs. Although the glass in the door below was designed long before the current pandemic hit, its relevance seems strong today and I truly love the simplicity of the blocks of colour.

The door has always been a symbol of new possibilities and strength. We are collectively living through a terrible tragedy but these bright symbols can hopefully provide some light through these dark days.