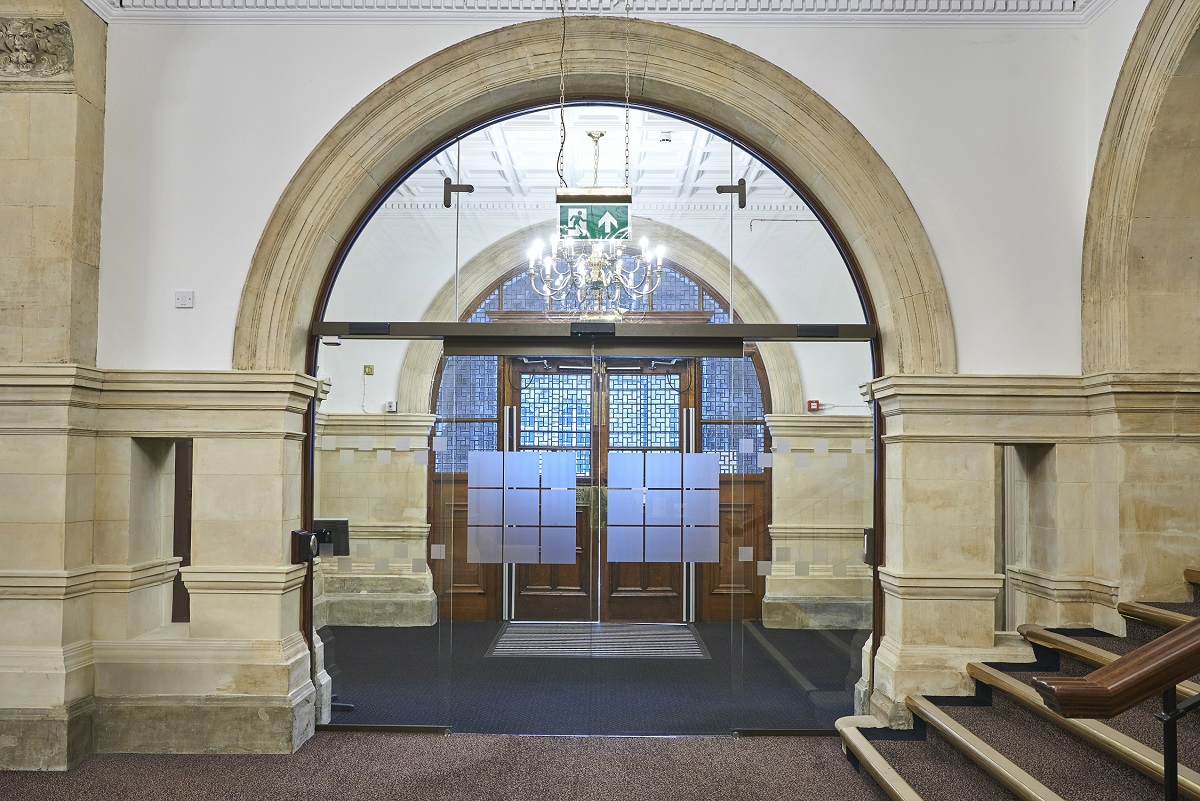 Geze UK has helped restore a sense of civic pride to Wakefield Town Hall, which has undergone a major refurbishment and added a touch of modernity to its grand interiors.

The installation of automatic doors – powered by Geze operators – within the redesigned interior has given the building, which originally opened in 1880, additional safety, security and convenience while maintaining the authenticity of the elaborate Victorian decor.

The creation of a glazed inner lobby, within an original open archway that frames the town hall’s traditional heavy, wooden-leaf doors, provides access to a waiting area and beyond into offices and function rooms.

A Slimdrive SL NT operator powers these bi-parting doors which incorporate etched glass panels. These allow visitors to see the ornate detail of the building’s interior while providing a practical draught lobby. The pattern of squares on the glass mirrors the ornate plasterwork in the ceiling above. They are one of the attentions to details that blend together, the old and new so seamlessly.

Another key aspect in the design has been to make the mechanisms of modern-day convenience as unobtrusive as possible. Due to their slim design and a drive unit height of just 7cm, the Slimdrive range can be discreetly installed so they are barely noticeable, and they assist with the demands of the Equality Act and are BS 8300 compliant.

The work on the automatic doors was undertaken through Laidlaw and Door System Installations.

Also fitted to the building are six pairs of Slimdrive EMD-f electromechanical swing door operators, two pairs to each floor. Like the Slimdrive SL NT, at just 7cm high, the Slimdrive EMD-F operator is extremely discreet and sits neatly on the frame. It provides assisted manual or automatic opening using the operating button with guaranteed constant opening and closing speed.

Despite their period appearance, the sets of double doors were a bespoke addition manufactured from hardwood by Longdon Doors to blend with the original Victorian design aesthetic. They are fire-rated and were independently tested with the ironmongery and have intumescent seals that expand in the event of a fire and seal off the gap between the door and the frame, preventing the spread of fire and smoke. This combined fire and smoke seal prevents the spread of smoke prior to the fire seal activating. The Slimdrive EMD-fs have also been fire tested and holds the Certifire Certificate of Approval CF 860 and has fire resistance of up to 120 minutes.

Why not subscribe to Glass Times?
Previous Sales boost Next Major refurb