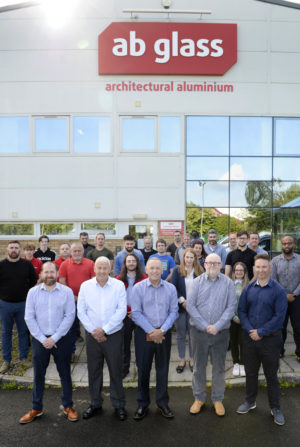 AB Glass is celebrating its 30th anniversary by giving to and helping charities associated with the armed forces, rather than holding a physical celebration.

AB Glass was founded by managing director Alan Brayley in 1991 after he cut his teeth as an apprentice in the glass and glazing industry. He started by going door-to-door seeking work in the Swansea area and it was four years before the business moved into its first premises.

Today, from its purpose-built headquarters in Swansea West Business Park, the company employs more than 40 people and supports a 20+-strong team of sub-contracted installation specialists. It has won awards for its quality and environment standards as well as commitment to a number of charities.

As it turns 30 this year, it had planned a summer barbeque. Instead, driven by the many challenges that charities have faced in the past 18 months because of the pandemic, it will donate what it would have spent on a party to a number of charities.

The company has a strong affinity with the armed forces and the veterans community in this part of Wales. Alan Brayley served in the Royal Regiment of Wales and Royal Welsh for 20 years, finishing his military career as a Sergeant Major. AB Glass has also employed many ex-service personnel and helped many more in other ways. He is a supporter of ABF The Soldiers’ Charity – the national charity of the British Army – and recently judged the Welsh Veterans Awards.

“It has been a tough period for everyone in the past 18 months due to Covid but many charities have really felt it,” Alan said. “As such, we decided that rather than spend the money on ourselves, it would mean a lot more to help others – something that has always been central to our ethos as a company.

“We will still raise a glass to what we have achieved internally. I am very proud of everything we have achieved. My colleagues and clients have always been incredibly supportive, and I would like to thank them for everything they have helped us achieve. Here’s to the next 30.”

Why not subscribe to Glass Times?
Previous Modular approach Next Charity golfing success