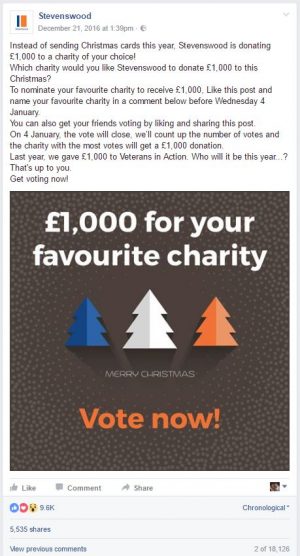 For the third year running, Stevenswood has donated £1,000 to charity rather than send Christmas cards.

Stevenswood asks its Facebook followers to vote for their favourite charity and the money is donated to the organisation that gets the most votes.

“In previous years, it’s worked really well,” Ron Hepburn, CEO of Stevenswood, said. “This year, it went ballistic. I watched the numbers grow over the holidays. Imagine my surprise when in the first 48 hours we’d reached more than half a million people! We had reached more than 1.2 million when we closed the competition, and we had nearly 18,000 comments with people’s favourite charities.”

The winning charity with 1,462 votes was Prince Fluffy Kareem. The U- based charity supports the work of Marte and Sherif helping the working animals and their owners in the pyramid area in Cairo, Egypt.

Emma Thompson, president of Prince Fluffy Kareem, was very happy when she heard the news. She said: “We are very grateful to Stevenswood for their generous initiative to help a charity! PFK provides free services, ranging from feed to medical treatment, to the working animals by the pyramids in Cairo. Thanks to Stevenswood we are now able to help even more animals and, by extension, their low-income owners.”

Ron said: “It was a clear winner and a deserving cause. £1,000 makes a big difference to smaller charities and we are happy that we can support them. Thank you to everyone who participated. The phenomenal results of this year’s competition show that Facebook is an important platform for businesses dealing with homeowners.”